I bought and read Jo Boaler’s “What’s Math Got To Do With It?” last summer. She really gave me food for thought regarding grouping by ability and gender differences. I also read “Mathematical Mindsets” this fall. As a high school math teacher, I set a goal to make my teaching more visual, delve into the why whenever possible (I struggled with partial fraction decomposition here and had to fess up that they would use it in calc 2), and deep dive into fewer problems with more depth. Last week in my Precalculus classes I broke out her “plus problem” and an “L” shaped problem when introducing arithmetic sequences. Both were effective in helping students see the parallels between arithmetic sequences and linear equations.

When we reached the Finite Differences topic in our curriculum, I was prepared with five quadratic models thanks to examples in her book and a few I created myself. The buzz in the room was tangible as my students accepted the challenges. I had laminated the sheets and supplied dry erase markers and let each group pick a problem. The “Growing Problem” was the most likely to be solved without hints. 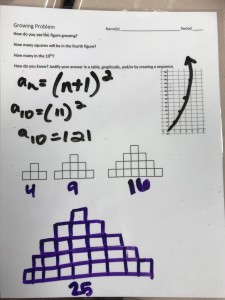 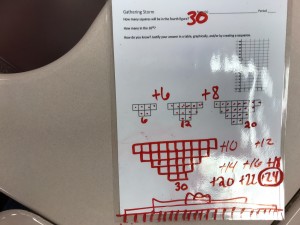 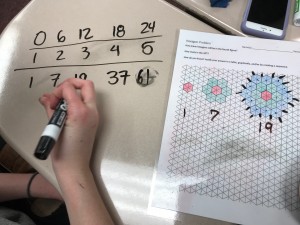 My biggest struggle was allowing them to productively struggle. It’s a time-management issue. All were actively engaged, but I didn’t know how long it would take for my students to arrive at the conclusion that the problems were quadratic. I also “rescued them” by guiding them to the general form of a quadratic and walking them through creating a system of three equations with three unknowns (great review of the systems and matrices chapters). How much more satisfying it would have been for everyone if I had scheduled a bit more time, guided more, and shown less. But I’m growing and growing is painful sometimes. How nice it would be if I could adopt Sugatra Mitra’s “grandmother persona” from his “hole in the wall computer” experiment and be able to say “I don’t know, but I’m sure you can figure it out.” without losing credibility with both students and parents.

My favorite question from the day was “are there any patterns that go beyond quadratic?” Armed with the knowledge they’ve gained, and being able to harness the power of the rref matrix feature of graphing calculators, I was able to provide a challenge of finding the explicit definition of the diagonal rows of Pascal’s Triangle. I’ve included Pascal’s Patterns in the links below. Two students turned it in the next day even though I told them they weren’t due for a week. I’ll be curious to see how many accept the challenge for this extra credit opportunity. 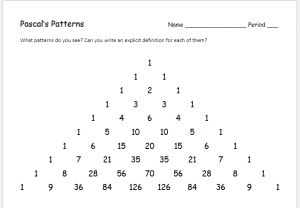