Home/Uncategorized/How My Fitbit Changed Me
Previous Next

I need to preface this by saying I was never very athletic. In junior high and high school every time I ran I would get a side ache (a sign of dehydration I know now). I was out for volleyball and had a wicked serve, but that was not very helpful when I could not pass the ball to the middle. A weekend warrior I am not.

I am the mother of three wonderful kids. They range in age from 5 to 16. After each one, I’d try to get back to exercising which consisted of walking or riding a bike. We have had a treadmill for 20 years and I have not worn it out (yet!). I have always watched what I ate, but love a good burger as much as most people. I have usually been able to control my weight by simply eating less, but as I’ve gotten older, my metabolism has slowed a bit. When I left teaching for a training position, the sedentary nature caught up with me and I gained around ten pounds during my first six months.

I could tell by the expression on his face that my husband was a little worried about his Christmas gift to me last year. He was not sure what I would think about receiving a Fitbit Force. I loved it! It fit my personality to a T. I love to set personal goals as long as I’m competing against myself. If someone challenges me to beat them, I quit out of stubbornness or lack of confidence – I’m not sure which. But this was about me trying to reach a daily goal. I loved being able to check my progress and track it on my iPhone. Initially I tracked my water consumption, food intake, and sleep cycles. Because I have always been disciplined where food is concerned, I soon just focused on movement.

To give you an idea of how much having a Fitbit strapped to my wrist changed my life, here are graphs of my activity levels pre- and post- Fitbit. Yes, I know they are from a completely different website – MapMyRun – but I have been a member for years and wanted a side-by-side comparison so I tracked my activity in two places. 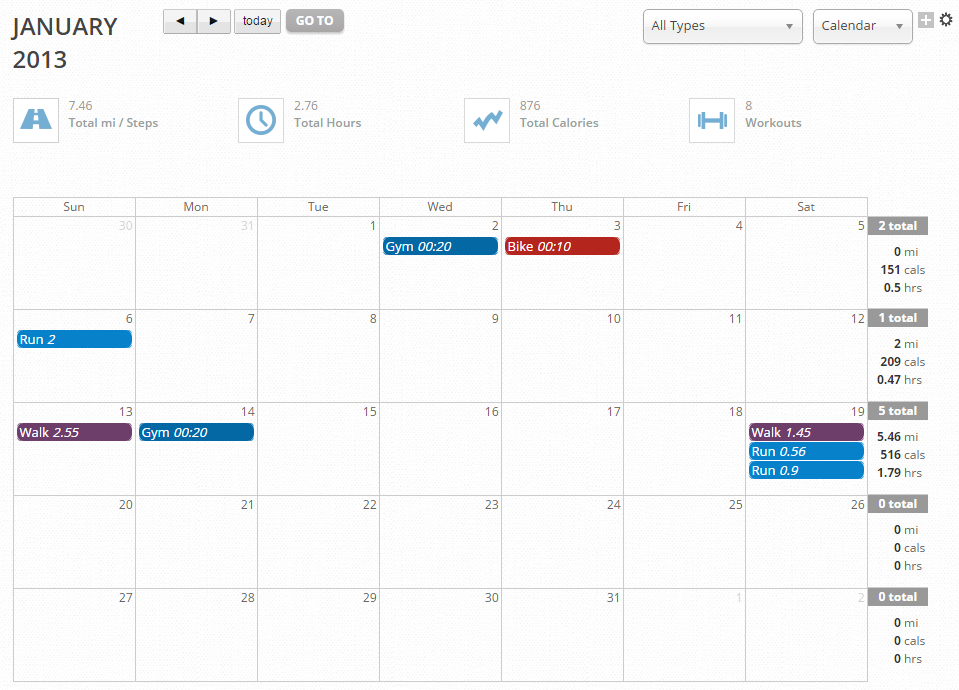 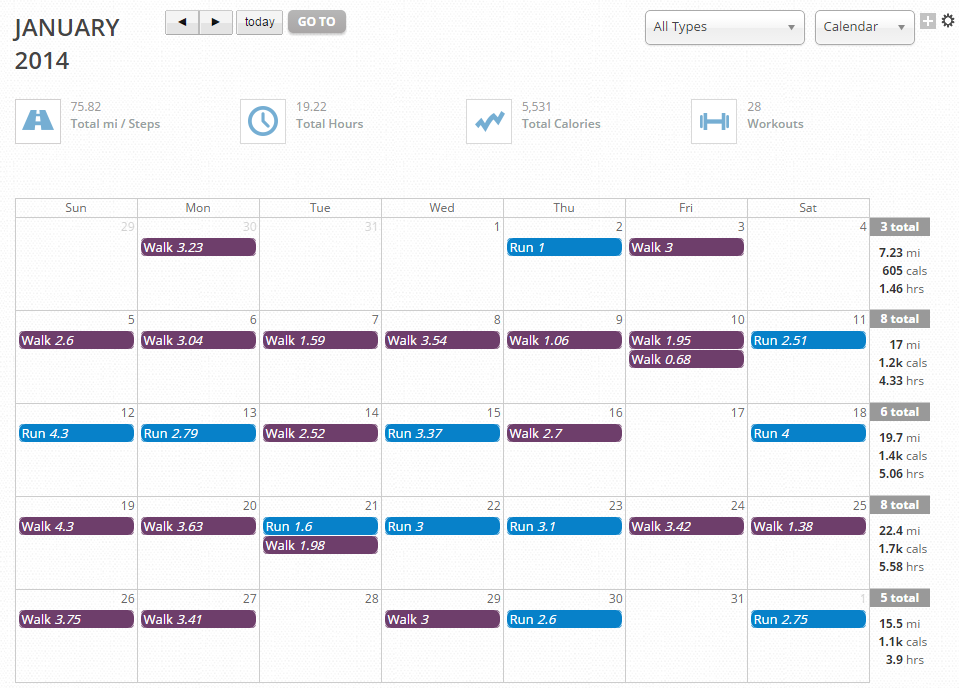 A common New Year’s resolution is to get fit and lose weight. On the left is January pre-Fitbit. On the right is the same month with a Fitbit.

Impressive. But did the motivation last? June in Nebraska is a much better month to exercise. This was my best month in 2013. 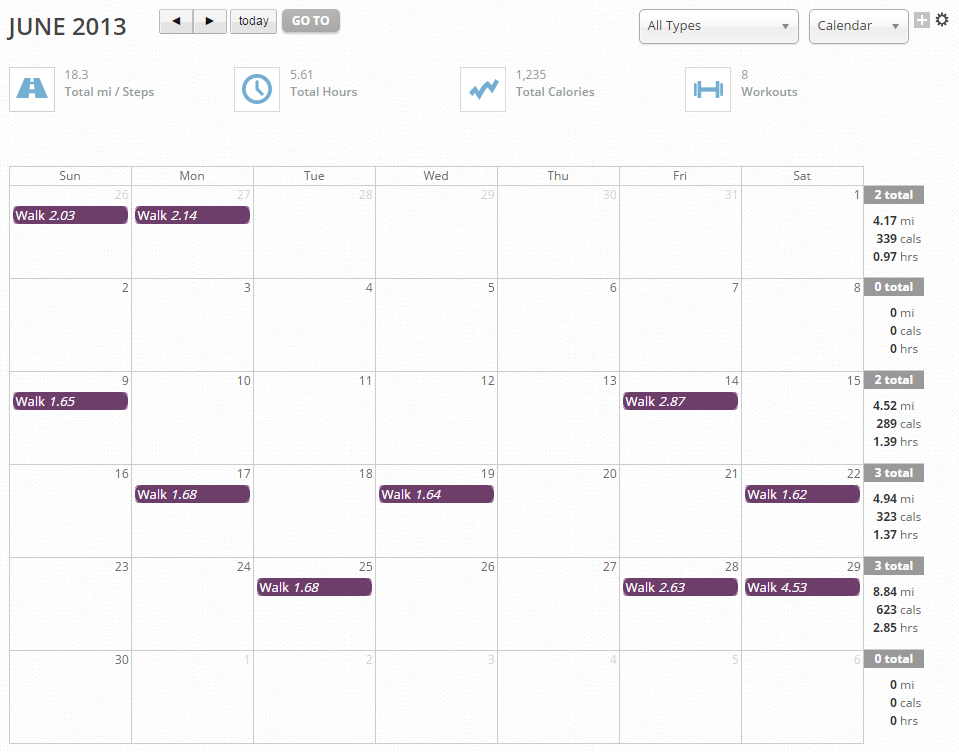 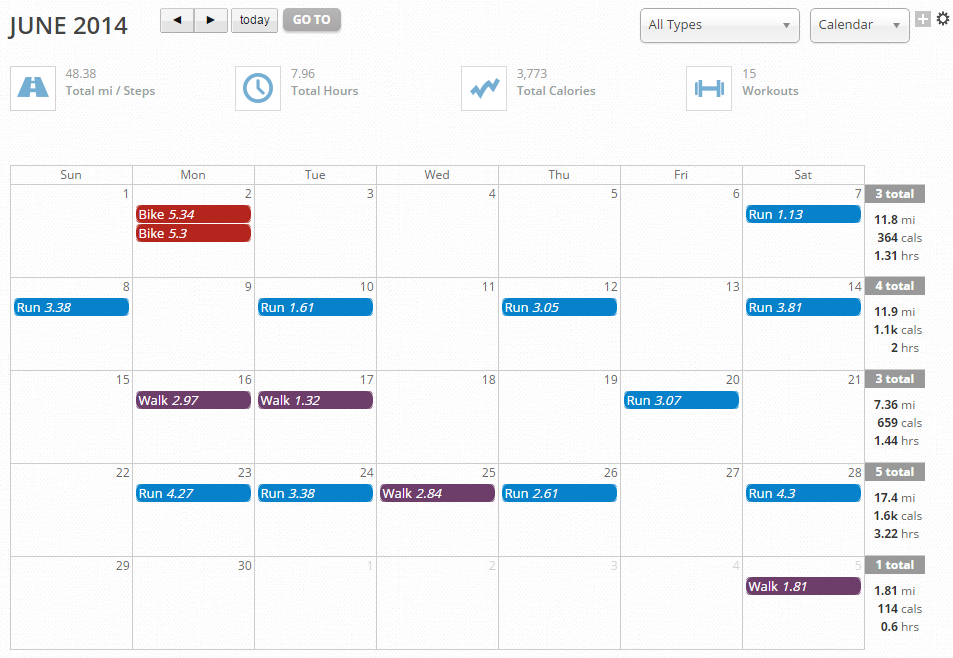 On the right is the same month with a Fitbit. Note I am running, not walking! I was never able to run around the lake near our house (4.3 miles) in under 50 minutes pre-Fitbit. My first run when the weather was nice in March was 46 minutes. My best time this summer was 39:56.

July of 2014 is an example of the confidence I now have in myself. Because the weather was great, I chose to ride my bike to work. Fourteen miles one way was not something I would have attempted before. I have to admit, about this time my husband was wondering what he created when he gave me this device to strap around my wrist. 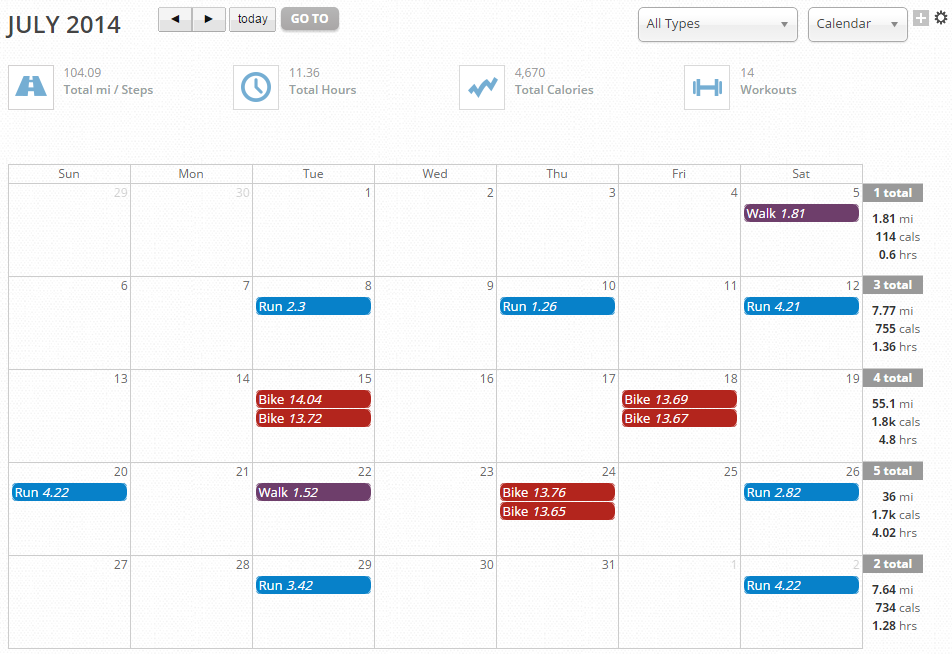 I’m happy to say I now weigh what I did in college. I never had toned thighs or a rear like this though. I had one bout with a repetitive stress injury and had to take it easy for two weeks. Once you are used to the adrenalin and endorphins, it’s hard to stop to recuperate. My kids can outrun me in the short distance, but can’t hang with their mom over a 5K. Who knew I was a cross country runner?

I don’t know if I’m just a part of a small subset of people that this type of device works for. However, I am so thankful for the hours I spent in my running shoes, building confidence, building muscle, and getting healthier.